Taylor, Mich. (Aug. 14, 2018) – In late spring, the Rotary Clubs of Taylor and Trenton formed a group lending partnership to help six area entrepreneurs with free small business training, micro-loans of up to $2,500 each, business mentoring by local Rotarians, and networking opportunities.

Called LaunchGLOBAL, it is part of a new pilot spearheaded by LaunchDETROIT, www.LaunchDetroit.org, a similar program initiated five years ago with Rotary volunteers from Rotary District 6400.

“Our mission is to support and develop local entrepreneurs in our community,” said Margaret Williamson, chair of LaunchDETROIT, who did the legwork to receive a global grant from Rotary International to create a group lending model in metro Detroit. “We know that group lending partnerships have achieved great success overseas, and this is the first to be piloted in the U.S. with three Rotary clubs–Detroit, Taylor and Trenton.

Valle, a recent University of Michigan-Dearborn graduate, started an event planning business shortly before she joined the group. 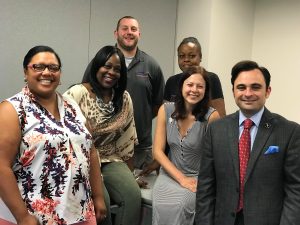 She added, “Our business group is so interesting and diverse even though there are two other event planners. We’re very different and have learned that we can mutually benefit each other.”

Abdal El-Rifaai described himself as a “cable guy” until three years ago when he started his business, almost by accident. He said, “When we found out we were having our son, we couldn’t find a crib we liked or could afford, so I decided to build one.” This led him to building all the furniture for his son’s room.

Soon after, El-Rifaai started taking orders for custom furniture and began remodeling homes. Today, he is insured and has two employees.

“Before joining the group, we did a lot of research and had a lot of trial and error,” said El-Rifaai, who valued the business classes. “They were amazing and eye opening.” The classes and mentorship helped him realize he wasn’t charging enough to run a business and cover his overhead.

Entrepreneur Leilani Norman, an event planner with 15 years’ experience, and her husband Ashon Norman, a chef for more than 25 years, decided to combine their expertise to start a catering and event business.

According to Leilani Norman, the micro-loan of $2,500 they received from the Taylor Rotary Club through the LaunchGLOBAL program will help them buy additional equipment for their events.

She said, “We can have up to four different events going on during the same day. Now, we won’t have to borrow or rent extra equipment.”

Adding that she values the weekly meetings with the other entrepreneurs, she said, “We share different ideas. It’s just the beginning.”

Entrepreneur Chantae Fowler joined the LaunchDETROIT program two years ago to grow her business of making and selling homemade ice cream. Due to her success and track record repaying the first micro-loan she received, Fowler was encouraged to join the LaunchGLOBAL program.

With the help of LaunchDETROIT, ice cream sales increased and she added more events and farmers markets. By receiving a micro-loan through the group lending model, Fowler wants to grow her capital, and secure a retail home where she can have a full commercial kitchen.

“I enjoy being part of this group and having regular contact with each other,” said Fowler. “It also helps a lot with networking.”

Lakingna Simmons, one of the three event planners, joined the group before launching her business. As a parent with two children on the autism spectrum, she had already chosen the name for her business, “Above the Spectrum.”

“This is something I can do for me,” said Simmons, a well-respected parent advocate and volunteer for The Children’s Center in Detroit.

Simmons shared that by joining the entrepreneur group, she is learning how to minimize problems and receive advice that will go a long way.

“I’m learning to put a price on my creative,’ said Simmons, who loves to design and decorate. She started making, donating and selling gift baskets for all occasions before becoming a nationally certified Ashworth event planner.

Entrepreneur Jared Bovary, a Trenton resident, had heard of LaunchDETROIT and learned about the new group lending program through Trenton Rotary. Having earned a Bachelor and Master’s degree in business, Bodary welcomed the opportunity during class to focus on crafting the pitch for his business, Detroit Hockey Company.

As a hockey enthusiast with two young children, Bodary knows how expensive everything is and that there is no affordable local source for hockey sticks, jerseys and other equipment. While acquiring hockey inventory, he also launched an online business, called Michigan’s Closet, to sell his custom designed shirts, hats and accessories to help promote Detroit and Michigan.

“I may have to decide whether to have two businesses, or focus on just one,” said Bodary.

Mentors from the Taylor and Trenton Rotary Clubs feel that the future looks promising for each of these entrepreneurs.