“This is our second group of entrepreneurs to receive micro loans. In January 2014, we awarded our first micro-loans to 13 Detroit entrepreneurs who were part of a pilot program,” said Rotarian Lawrence Wright, president of the LaunchDETROIT initiative. “Their input and achievements during that first year were invaluable in helping us prepare for this new class.”

Qualifying applicants receive business training provided by instructors from Baker College during six three-hour classes, held once a week.  Upon completion of business training and business plan presentations, the LaunchDETROIT selection committee interviews candidates for the micro-loans and assigns a business mentor to each.

Successful candidates must have a business product or service that will enable them to repay their loan within one year.

“Our mission is to support and develop entrepreneurs and small businesses in under-resourced communities in the Detroit region,” added Wright.

LaunchDETROIT has achieved national recognition and was featured in the September 2014 issue of The Rotarian Magazine, published and distributed by Rotary International in Evanston, Illinois. 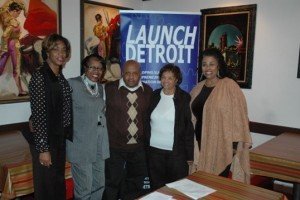 Among the 2015 class of entrepreneurs is Ronier Golightly, owner of Motor City Popcorn, who was featured by local media as a vendor of Detroit-themed popcorn to the 2015 North American International Auto Show. According to Golightly, LaunchDETROIT micro loan funds helped him with the purchase of inventory and marketing tools to service a large number of customers.

Other recent graduates include Joan Banks, owner of Best Gifts and Collectibles, a retail store located in Livernois’ Avenue of Fashion in Detroit. Also located in this emerging retail district is Regenia Smith of Heavenly Creations which specializes in garment making, alterations and repair.

Detroit entrepreneur Donna Batista, owner and director of Batista Gallery, looks forward to relaunching and expanding her gallery to exhibit and sell the works of local and national artists. It was forced to close during the economic downturn.

Detroiter Monica Denise Davie of CEI is providing support services in the area of character education and character building for middle schools students, and helping to engage them in service projects that contribute to their communities and neighborhoods.

“Our LaunchDETROIT team of Rotary volunteers has never been more optimistic or passionate about the possibilities and opportunities these entrepreneurs bring to Detroit,” said Margaret Williamson, vice president of LaunchDETROIT. “We’ve already begun the visioning process for the next five years.”

LaunchDETROIT is a non-profit program powered by Rotary volunteers from District 6400, which serves southeast Michigan and southwest Ontario.  To date, funding and resources for the program have been provided by local Rotary Clubs in Rotary District 6400, Baker College, and the Presbytery of Detroit.

For more information about donation and partnership opportunities along with applicant criteria and requirements, email contact@LaunchDetroit.org.