Three women entrepreneurs in Detroit recently shared how LaunchDETROIT, a micro loan program developed by Rotary District 6400, has helped them grow their businesses. They are among 32 entrepreneurs who have taken part in the program that was introduced in Detroit five years ago and has received international attention.

“What started more as a hobby for me, is now a business that has gone full throttle,” said Melody Duncan, owner of Luv Dollz, a maker of natural and organic skin and hair care products. Duncan is a recent graduate of LaunchDETROIT, a micro loan program developed by Rotary 6400. 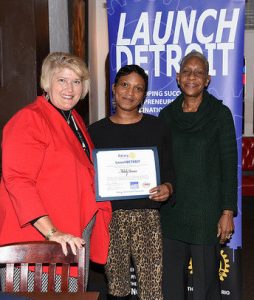 At center, Melody Duncan of Luv Dollz displays her LaunchDETROIT certificate from Sue Goldsen, 2016-17 District Governor of Rotary 6400, at left, and Margaret Williamson, chair of LaunchDETROIT.

Duncan received a loan of $2,500 from LaunchDETROIT in January 2017 after successfully completing 10 weeks of free business training at Baker College, funded by the Rotary program which also provides mentors and networking opportunities to each participant.

“The business plan I developed during the classes is something that I continue to review and put into action,” said Duncan, who used the loan to update product labels, and purchase new jars, signage and promotional materials.

Today, Duncan’s business is growing through customer referrals, the website, luvdollznatural.com, and the addition of new products.

“Everyone loves our bath balms,” added Duncan, who is preparing to host soap making and pamper parties in the near future. “With the quality and packaging of Luv Dollz, our products will soon be featured in boutique hotels and others that want first-class products.”

Budding entrepreneur Aldena Williamson, an experienced chef and graduate of Johnson & Wales University, began the LaunchDETROIT program with the goal of owning a food truck to offer a selection of gourmet dishes. 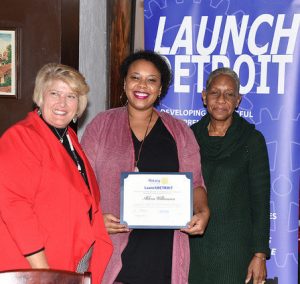 “The classes at Baker helped me realize I wasn’t ready to invest that much,” said Williamson, who instead launched “Aldena’s” to deliver home-delivered meals specially prepared for each client’s needs and tastes. Aldena’s also provides catering throughout metro Detroit, including recent events in West Bloomfield and Grosse Pointe.

“My business has grown mostly by word of mouth,” said Williamson, whose mentor has been very supportive and given her referrals. Several of Aldena’s clients live in the Lafayette Park and Rivertown neighborhoods of Detroit.

“I still have the goal of owning a food truck,” said Aldena. “LaunchDETROIT has helped me prioritize, so I’ll be better prepared to make that investment when the time is right.”

Chantae Fowler, owner of Ice Cream Place in Romulus, is also a 2017 graduate of LaunchDETROIT. While still working in the corporate world, Fowler began making and testing homemade ice cream on her staff. 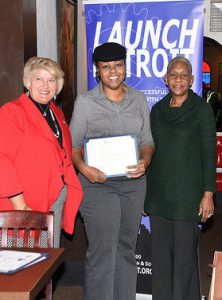 It took five years before she achieved the results she wanted. In 2008, Fowler took the leap to start her business, Ice Cream Place, and now rents commercial kitchen space in the Romulus Athletic Center to make and sell her homemade ice cream and cookies to the public.

With the loan from LaunchDETROIT, Fowler made a down payment on a commercial batch ice cream machine and purchased other supplies to help increase production for wholesale distribution to local markets.

“My gross sales have increased two and a half times thanks to the LaunchDETROIT loan and my mentor, who helped me expand my network,” said Fowler, who also does a lot of catered events. “This year I was able to add two farmer’s markets and next year I’ll be at five.”

According to Margaret Williamson, chair of LaunchDETROIT, the program has evolved over the past four years, while maintaining a combination of education, micro loan, mentorship and networking.

“By investing in entrepreneurs, who include both men and women, we’re investing in Detroit’s future,” said Margaret Williamson, chair of LaunchDETROIT. “What we’ve started in Detroit is now being copied in cities across the country.”